Livingston was named in honor of William Livingston, the first governor of New Jersey and a framer of the United States Constitution. Livingston served as governor for 13 terms before he died in 1790.

In 1702, settlers from Newark purchased a tract of land that encompassed the areas now known as Caldwell, Livingston and West Essex. They paid 130 English pounds to the Lenni Lenape Indians. In 1811, seven hamlets — including Teedtown (now Livingston Center), Northfield, Morehousetown (Livingston Circle), Cheapside (Livingston Mall), Washington Place and Squiertown (Route 10 Circle) got together and petitioned for the formation of The Township of Livingston.

Livingston’s first town meeting was held on February 5, 1813. At this meeting, the people decided that the town should be run by a mayor and a township committee. About 100 people, mainly farmers, lived in town at that time. In the early years, farming and lumber were the main sources of income for the township. Shoemaking became a major industry during the Civil War. The dairy business became Livingston’s leading industry after the Civil War and remained so well into the 20th century.

The first school in Livingston was built in 1783, a one-room schoolhouse on Northfield Road where Roosevelt Plaza is today. The population grew slowly because the town was not close to a primary rail line. Mt. Pleasant Avenue, which runs through Livingston, was the first turnpike, or toll road, in New Jersey. Starting in the 1800s, stage coaches made what was then a one-day trip from Newark to Morristown. Between 1813 and 1920, it increased from 1,000 to 1,500. 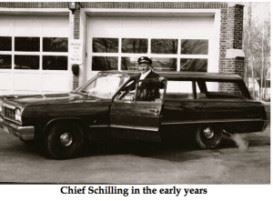 View the History of the Livingston Fire Department.

The area became a commuting suburb after the invention of the automobile and the construction of hard-surfaced highways. After World War II, housing developments replaced farms and many people moved to Livingston. The town grew very quickly; in 1950, there were 9,932 people, and in 1960, the population had jumped to 23,124 people. It peaked in 1970 with 31,653.

In 1957, a new form of government, the Council-Manager form, was started in Livingston. A Town Council made up of five Livingston citizens was also created. Each year a mayor is chosen from among the members of the council.

According to the 2010 census, Livingston has a population of 29,358 people. Today’s residents enjoy a comfortable suburban lifestyle with easy access to New York City and other areas of New Jersey. Interstates 80 and 280, the Garden State Parkway, the New Jersey Turnpike, and Route 24 are all close to Livingston. Prospective residents can choose from homes in a variety of sizes and types. The town boasts a highly rated public school system. It has six elementary schools, two middle schools and a comprehensive high school that received the US Department of Education’s Blue Ribbon Award in 1998. The town’s Senior, Youth and Leisure Services (SYLS) oversees two community pools, tennis courts, basketball courts and playgrounds, youth and adult athletics, and a broad selection of assistance programs and activities for seniors. Livingston’s quality of life excels in large part because its residents are active in over 40 Volunteer Boards and Committees.

Read Livingston: The Story of a Community (PDF), Revised by the Livingston Bicentennial Historical Committee, 2013.

Thanks to information from township intern Eric Chen and “Our Community: Livingston,” by Riker Hill Elementary School teacher Maryann Levine.