The Livingston Fire Department was formed in November of 1921 following a meeting of the Livingston Gun Club. The town was extremely rural at the time and did not have an organized form of fighting fires. Buckets and wells offered the only true water supply for protection. There was little or no money to spend on equipment, so the first months were spent discussing what could be done to provide fire protection. Eventually, twelve fire extinguishers were purchased, which were picked up the members when there was a fire. The town then installed eighteen large metal rings, which were placed throughout the town. When a fire was detected, residents would go to the nearest ring and begin hitting it with a hammer, alerting others to do the same, hitting the rings until firefighters could hear the alarm.

In 1923, the Township Committee allotted $3,500 to the department. The men took the money and purchased a Reo Chassis and mounted a horse drawn chemical truck, which was loaned to them by the Newark Fire Department. The department's first engine would be forever known as "Mary Ann." Soon after, a wooden firehouse was built on donated property in Livingston Center where today's Fire Headquarters still stands. Getting the department's next engine would not be so easy. 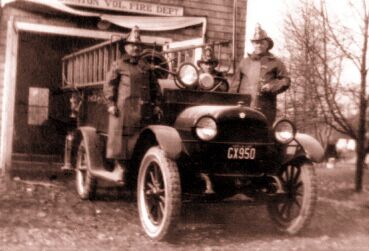 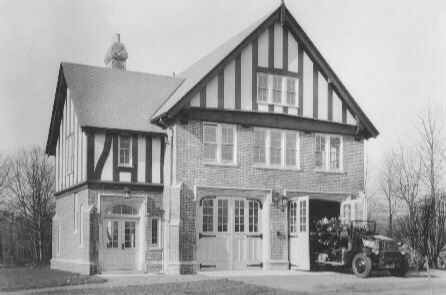 The members attempted to gain funding from the town in 1926 for a new fire engine at a cost of $12,000. The Township Committee denied the request, setting off a huge controversy. The public voted in 1927 to allot the money for a new engine, over ruling the Committee. The members voted 29-5 to use funds to purchase an American LaFrance, but the Committee accepted bids and Mack beat American LaFrance by $2.00. The contract was awarded to Mack, over the objections of the men.

The controversy led to the Chief (Hockenjos), the President, and seventeen other members resigning. The department received the 1928 Mack and painted it white, earning its historical name, "Snow White". A new masonry Headquarters building was constructed in 1929 where the old one stood. This building, with major alterations and additions, still serves as Fire Headquarters today.

In 1933, the Township purchased a Packard automobile, which the men altered by welding on cabinets for equipment. This vehicle was the first Rescue Company in the area. In 1935 the department received delivery of its’ third engine, a Ford Pumper. At about this same time, the town installed a siren alerting system for firefighters. Sirens were located throughout town with an alarm box in Police Headquarters. The system had a number of round metal rings, each with a different set of teeth. Each ring would result in a different series of siren sounds, much like Morse Code. The different patterns would not only alert firefighters to a fire, but the codes actually instructed them which part of town to respond to. The system did not work as well as originally thought. It would be replaced with an air-horn system in 1946.

In 1937, the department purchased a LaSalle ambulance to provide emergency medical care and transportation to residents. The department would handle such calls until 1950, when members voted to give the LaSalle and $250 to the newly formed Livingston First Aid Squad, made up of 25 firefighters. The First Aid Squad is still operating today;  you can visit the LFAS website here. 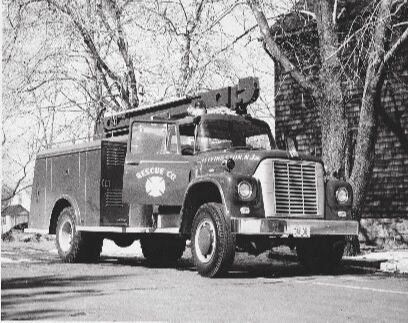 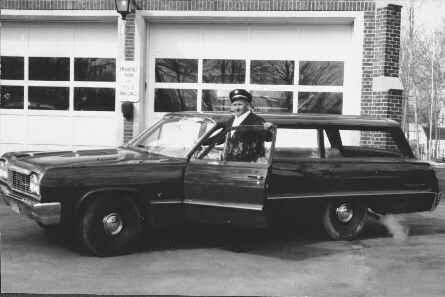 Chief Schilling in the early years.

Construction of the department's second fire house, the Northfield Station, was completed in 1952. During construction, the department acquired another engine, a 1949 Mack, which was temporarily housed in a bay at Merrigan's Northfield Esso, now the Shell station next to Sam's in Northfield Center. By this time, the 1933 Packard Rescue was feeling the effects of age. The department purchased a 1952 Dodge Power Wagon Rescue Truck.

In 1955 the department acquired yet another engine, a Mack, as the Township continued to grow. The engine was known as "Sweet Pea". Around this time, "fire bells" were installed in each firefighter's home. The bells would activate with the sirens and air-horns, ensuring quick notification and response. A short time later, in 1957, the Circle Station was completed. By 1960 the department had also added two more engines, a 1959 Mack and a 1960 International.

In 1963 the department took delivery of its' third rescue vehicle, an International truck equipped with a hydraulic winch and boom. A major addition to Fire Headquarters was completed in 1965, adding three equipment bays, offices, and a squad room to the building constructed in 1929. Major additions were also completed on the Northfield Station in 1967 and 1970.

In the late sixties and early seventies the Township continued to grow with major commercial building being completed. St. Barnabas Medical Center was completed and the Livingston Mall opened and is still the town's largest structure. This in part prompted the purchase of the department's first aerial apparatus, a 1974 Mack 85-Foot Snorkel. By 1975, the department was averaging more than a thousand runs per year.

Equipment upgrades continued in 1976 when the department installed its' first set of hydraulic Hurst Jaws of Life on the rescue truck. In 1977, a Self Contained Breathing Apparatus (SCBA) refill system was installed at fire headquarters. Several years later, in 1981, a new Mack 1250GPM engine was put into service at Headquarters.

In November 1982, the department responded to perhaps its' most unusual call when two small planes collided in midair over Manor Road and Demarest Drive. Both planes plummeted to the ground killing the two pilots and one passenger. Miraculously, both planes landed on grassy areas of two residences, which were not damaged and fortunately there were no injuries on the ground.

The departments first Annual Open House during Fire Prevention Week was held in October 1985 in conjunction with the First Aid Squad. The event was designed to allow the Township's residents to view the department's apparatus and learn about fire safety. The event was also used as a fund raiser for the St. Barnabas Burn Foundation. The event is still held each year and continues to raise money for the foundation.

Progress continued in 1986 when a large addition was constructed at the Northfield Station in anticipation of the arrival of the new rescue truck due to be put in service in 1987. The new rescue truck, a 1987 Mack, was the department's fourth rescue vehicle and came complete with hydraulic boom, winch systems, scene lighting, two sets of hydraulic jaws and cutters, and many other tools. The new truck was joined by a new Mack Engine, which arrived and was assigned to the Northfield Station in 1989.

In 1990, Chief Charles Schilling retired after thirty-six years as chief. Chief Schilling still serves as a member today, and is also an extremely active member (and original Charter Member of the First Aid Squad), as well as working for the Building Department as a Code Enforcement Officer. Chief Craig Dufford took over when Schilling retired and served until his retirement in 2003. Chief Dufford also remains an active member of the Fire Department and First Aid Squad, and is now a Fire Inspector with the department. Chief Christopher Mullin took the helm in July 2003, when Chief Dufford retired.

The department's round "Ever Alert" insignia, used for decades, was changed in 1991 to the more recognizable Maltese Cross. The original design was incorporated in the new insignia as the center circle of the Maltese Cross. Soon after, the department purchased its' first enclosed cab engine. The new 1992 Mack replaced the 1971 Mack stationed at the Circle Station.

In 1996 the department celebrated its' 75th Anniversary. A huge celebration was planned to coincide with the delivery of the second enclosed cab engine. Although the event was well planned and one to remember, the new Mack was not delivered in time. The show had to go on, and the 1992 Mack was polished and filled in for the missing one. Not all could be fooled, but enough were and the celebration went ahead. The new engine did eventually arrive.

The Insurance Service Office also came to town in 1996. Following the in-depth inspection, Livingston's classification was changed from a Class 4 to a Class 3. This change was the result of many hours of work upgrading equipment and training.

Just prior to September 11, 2001, the department took delivery of its' second aerial piece, a 93-foot American LaFrance Ladder Tower. Just days after the wet-down, the terrorist attacks of 9/11 shocked the world. In the aftermath that followed, the department's rescue truck covered mutual-aid assignments for FDNY's Rescue 5, based at the Clove Street Station on Staten Island. Rescue 5 had responded to the World Trade Center, losing 11 of 12 men that rode that day. Engine 5 from the Circle Station also covered for FDNY as they worked at Ground Zero, answering calls from the Watkins Street Station in the Brownsville Section of Brooklyn.

In September 2005 the Livingston Fire Department placed in service a 2005 American LaFrance Pumper. This is the latest addition to our fleet. A photo of the new engine is seen here at left. The new American LaFrance replaces a 1982 Mack Pumper that now serves in reserve as Engine 6 at the Headquarters Station. 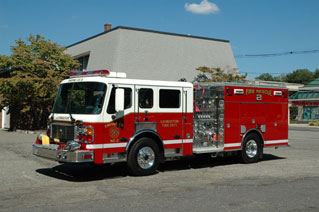 View of the 2005 American LaFrance Pumper.

The presidents of the two organizations (Thomas Cooney - LFD & Craig Melhorn - LFAS) created special committees in order to begin forming ideas about redesigning the Center Island. The goal was to create an area that could be viewed from Livingston Avenue, with memorials dedicated to the members of each department visible from the parking lot. After countless hours and meetings, a design was formulated with the help of a local landscaping company, and plans were drawn up. Since Livingston Avenue was being completely redone by the Business Improvement District (BID), our plans were reviewed with them to ensure consistency.

The new Center Island was completed on May 26, 2006 and now stands as a testament to these organizations’ traditions and dedication to the community